>IN SURE AND CERTAIN HOPE OF THE RESURRECTION

Albert was born 8th February 1881, the son of Charles and Martha (nee Moss).

In 1891 his father was recorded as a railway plate layer. In 1911 he was living in Datchworth, having married Alice Mary Ewington, in 1906, and they had three children, and is described as a Builder's Labourer. They had five children in all eldest of whom was only 9 years old when he died.

Albert enlisted at Welwyn into the Bedfordshire Regt. He arrived in France 1st April 1915 and so must have been a volunteer. About the time he joined the Battalion they took part in the Battle of Hill 60 Ypres.

He would probably have been a member of the "Left Behind" party due to his inexperience. However over the next year the Battalion was heavily engaged in the Somme battles. In Mar 1917 the battalion were in trenches near Chambrin and on 16 Mar 1917 the Germans attempted a Trench Raid supported by an Artillery Barrage on the British lines. Albert was killed in this action, probably by artillery bombardment.

His wife, Mrs, A. Tyler, Datchworth Green, Herts. ordered his headstone inscription: "IN SURE AND CERTAIN HOPE OF THE RESURRECTION". 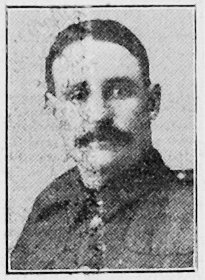