He was the second son of John B. and Sarah Jane Gates (formerly Gregory) of the Three Moorhens Public House on Hitchin Hill. See also Frank Gregory. Before joining up he was in the employ of Mr S.S. Burger of Bragbury and later he worked in Berkshire. He had been born in Aston near Stevenage, resided in Hitchin but enlisted in Reading.

He was given Regimental Number 200506 in the 2/4th Battalion of the Regiment and sent to France. He was Mentioned in Despatches for taking a Company with ammunition to the Oxford & Buckinghamshire Regiment. They went on hands and knees across half a mile of ground under fire to deliver it. Alex was to lose his life in the closing stages of one of the major British offensives, The Battle of Passchendaele. The offensive had been launched on 31 July 1917 and continued until the fall of Passchendaele village on 6 November. The area had suffered the heaviest rains it had seen for 30 years and this, combined with intensive shelling from both sides, had turned the ground into a hellish morass. On the 9th October 1917 the Battalion were located in two trenches called Canopus Trench and California Drive, near a point called Winchester Farm, approximately 2 miles East of Passchendaele. They had been in the Front Line since the 27th September and had been fighting in terrible conditions. The following day the Battalion occupied shell holes near the village of Arbre under extremely trying conditions. It is not known at what point Alex was killed but it is believed he may have been the victim of artillery fire. Later he was killed when his Battalion was leaving the trenches for a rest six days after he had returned from leave. A stray shell struck two miles from the front-line trenches killing and wounding several men. He was buried by the shell and died ten minutes later. He was due for another stripe, but was killed before it was awarded. 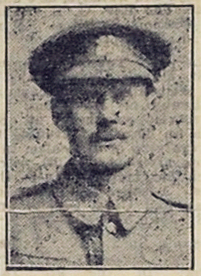