Born 1895 Bragbury, Henry was the son of the late Henry & Martha Wilson of Stevenage, and was employed in the town as a Policeman. He was baptised in Datchworth on 14 April 1895.

In 1901 they were living in Bragbury, near Datchworth and his father was described as a domestic coachman. In 1911 Henry was a wheelwrights apprentice. Army records give his residence is given as Stevenage.

A brief record about him appears in De Ruvigny’s Roll of Honour 1914-1918. It records: "Trooper, No 110612, Herts Yeomanry, attd. Machine Gun Corps, Australian Calvary, Australian Expeditionary Force, only son of Henry Wilson, of 4, Albert Street, Stevenage, by his wife, Martha, daughter. of the late Joseph Denton, of Northamptonshire; born Bragbury End, Datchworth, Hertfordshire, 9 Jan 1895; educated Aston County Council School; was Policeman; volunteered for active service, and joined the Herts Yeomanry 31 May 1915; subsequently attached with his section to the Australian Cavalry Machine Gun Corps. He died near Damascus 16 Oct.1918, of enteritis, contracted while on active service. Buried Beyrout (Beirut). He was a good cricketer, and a footballer of local repute."

He joined the Hertfordshire Yeomanry in May 1915 as a Private with the Service Number 2425 and arrived in Egypt on the 16th November 1915, being later transferred to the Machine Gun Corps. Henry died of Enteritis on the 16th October 1918 aged 23 and is buried in the Beirut War Cemetery, Lebanon. His parents lived at Bragbury End, where his father was a Domestic Coachman, and thus his name is also recorded on the Aston war memorial. Both memorials show Harry as serving in the Hertfordshire Yeomanry, his original unit. 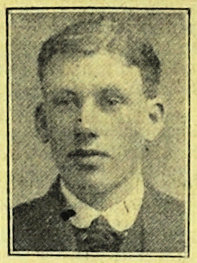