Born 6th September 1885, baptised at St Luke’s Church Kensington on 27th December 1885. Only child of Stanley Greville and Edith Harding. His father was an accountant and a partner in a builder and contractor’s business in Pimlico, who retired in 1893. In 1911 census the family lived at 15 Lowndes Square but had moved to Lake House Salisbury by 191 and then moved back to Lowndes Square after the war. He was educated at Harrow, Rendall’s House 1889-1903, and attended Christ Church college Oxford from 1905. In 1911 census he was shown as a man of independent means. On 4/5/1912 he was gazetted 2nd Lieutenant (on probation) in the 4th Battalion 1 Bedfordshire Regiment, and was promoted to Lieutenant on 17/03/1913.

In October 1914 he was attached to the 1st Battalion and served with the British Expeditionary Force in France and Flanders. He took part in 1st Battle of Ypres and was killed leading his men in a counter attack up a hill on 7/11/1914. He had only been with his Battalion for a month. 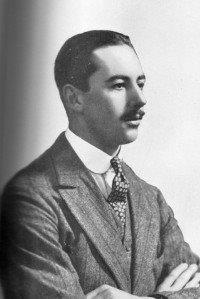