William was born in Paddington in 1878 the son of Robert and Ellen (nee Carnell) Harvey. In 1881 they were living 21 Woodchester Street, Paddington, Robert was a Carman, and they had three children.

The family has not been traced in 1891 but in 1901 was at 10 Tavistock Crescent, Paddington. Robert was now a Painter’s Labourer, while William age 23, was described as a Company’s Secretary. William’s father died in 1904, his death being registered in Watford, while in 1909 William is known to have been living at Rose Cottage, Chesham Road, Chorleywood. He was at the same address on the 1911 census together with his mother, Ellen, and described as a Law Clerk.

He is recorded as enlisting in Aldershot.

All that is known of William’s army record is that he was a Stenographer, and that he had insufficient service for his dependents to receive a War Gratuity.

He died on the 5th of January 1915 in the Cambridge Military Hospital Aldershot from heart failure following an operation for chronic intestinal blockage.

Malcolm Lennox, Our Village in the Great War, Mike Collins 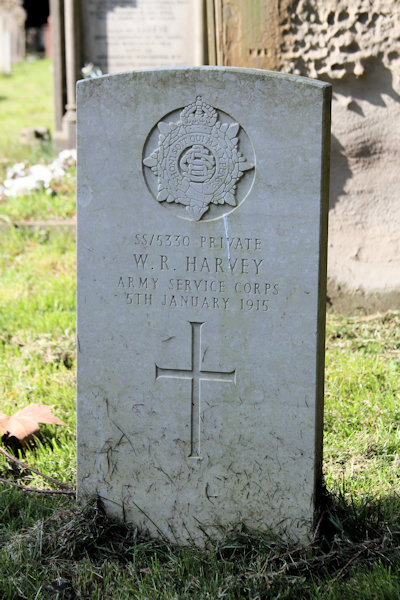