Born on 13 September 1885 in Woolmer Green, Welwyn, Herts and lived in Archers Green, Tewin, Hertfordshire, his parents were John Charles & Sarah Elizabeth Stratton. Baptised on 4 October 1885 at St Mary's, Welwyn. The 1901 census records that the Stratton family were living in one of the cottages in Archers Green in Tewin, near Hertford. Frederick (3) brother Samuel (1) were living with their parents. The key to Frederick’s link with Colney Heath appears in the 1911 census, which also confirms that Sarah Stratton, his mother, was the sister of Charles Mardel. In 1911 the Stratton family, all twelve of them, were living in Flint Cottage, which is a five bedroom cottage on Hedges Farm, St Albans, in addition to Frederick and his parents the following siblings are recorded: John (11), Annie (9), Albert (5), Newlon (3), Mary (2) and Fanny (2 months). Also recorded are, his uncle, Charles Mardel (27), Cecilia Mardel (13) the sister of Charles Mardel and Mary Fitzgerald (23) was visiting at the time. It is believe that Mary married Charles. In addition to the above there is also a strong link with St Mark’s Church, Colney Heath as records show that five of his brothers and sisters were baptised there: Albert Samuel George – 28th October 1906, Newlon Leslie – 27th October 1907, Mary Elizabeth Fanny – 25th April 1908, Fanny Kathleen – 29th April 1911 and Charles James – 25th March 1917.

From the 1911 census it would appear that Frederick joined the army directly from school.

Frederick’s medal roll card confirms that he was first sent to France on 30th September 1915. 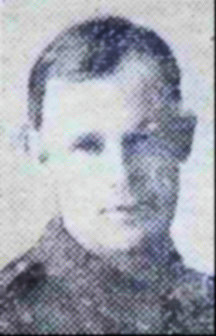