>He has no Headstone. He is Commemorated on the Le Touret Memorial, in France to the missing.

He was educated at Cargilfield Prep School in Scotland and at Rugby before proceeding through Sandhurst to obtain a commission in the Northamptonshire Regiment in February 1887.

He followed a military career and was promoted to Lieutenant with the 2nd Battalion in April 1890. He served in China from April 1887 to January1889, then in the Straits Settlements, a group of British territories in Southeast Asia, until November 1892.

During the Boer War, from July 1899 to July 1902, he was on the staff at Devonport, Portsmouth as Superintendent of Gymnasia, Western District. He subsequently served in South Africa from October 1902 to May 1907.

Captain C E Higginbotham was appointed DAAG Standerton District, Transvaal on 2nd Nov 1903 and was promoted to Major in June 1907. From 1909 to 1913 he was Superintendent of Gymnasia at Aldershot, encouraging all sports in the Army, and was Captain of the Aldershot Officers cricket team for several years.

On 23rd January 1909, at St Peters Church, Birch, Essex, he married Lucy Frances Round, the daughter of the Right Hon James Round of Birch Hall, Essex. They made their home at Highcliffe, Alexander Road, Farnborough, Hampshire.

On 6 November 1914 he went overseas with the 2nd Battalion of the Northamptonshire Regiment and was killed whilst second in command at the Battle of Neuve Chapelle on 11 March 1915, aged 48.  His Commanding Officer wrote from France “Had he alone survived I should be content for the future of the Regiment. He was everything to me, during the war, as a soldier.”

His wife died a month before him on 5 February 1915 at Birch Hall, Colchester, the Round family home.  Major Charles Ernest Higginbotham is remembered with honour on the Le Touret Memorial, in France, Panel 28 to 30 and is commemorated on the Baldernock war memorial in Glasgow and in the Cargilfield Prep School memorial chapel.

His wife, Lucy Frances Round, was the sister of Emma Margaret Round, who married John Wilfred Lewis, who by 1915 was the vicar of St Matthew’s Church, Oxhey.

Major Higginbotham Is commemorated on the memorial at St Matthew’s Church, together with the three Round brothers, Auriol, James and Harold, cousins of Lucy and Emma, who were also killed during the war.

After his death he was recorded as the son of Mr. and Mrs. C. T. Higginbotham, of Craigmaddie, Milngavie, Glasgow. Information provided with kind permission of Bushey First World War Commemoration Project – Please visit www.busheyworldwarone.org.uk. 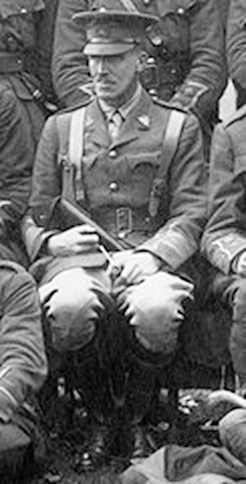