Frank is thought to be the son of James and Jessie (nee Day) Hillier and to have been born in Headington, Oxford in 1887.

James was a Boot Maker and in 1891 was living Finborough Road, Kensington, with his wife Jessie and three children. Frank was not with them and has not been traced on that census. In 1901 he is at 17 Railway Street, Hertford, the home of Mary Taylor, 59. Widow, Publican, described as her Nephew. His sister Minnie is also there along with two of Mary’s children. On the 1911 census Frank is at 356 Kings Road, Chelsea, described as a Barman, the home of Eliza Gillet 59, Widow, Shopkeeper, together with Edward Ablett 30, a Cook.

Recorded as enlisting in Wandsworth, Surrey.

The 8th Battalion was raised at Canterbury in September 1914, joining 72nd Brigade 24th Division. They went to France in August 1915 concentrating in the area between St Poland Etaples.

Frank entered France on the 31st of August so would have been with the Battalion when it first saw action, suffering heavy losses, at Loos on the 26th of September. They subsequently took part in numerous actions on the Western Front in 1916 and 1917.

Frank was wounded and taken prisoner at some point in 1917, although the circumstances are not known. He was returned to England after the war and died of his wounds in Manchester Royal Infirmary on the 29th of December 1918. 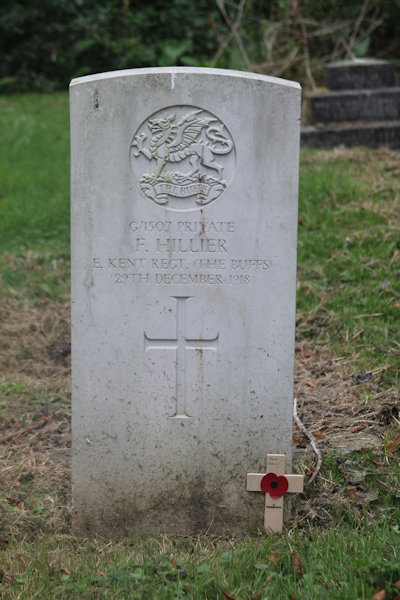