Born on 4 Mar 1878 in Dumbarton, Ronald Morley Hooper was the son of Rev. John Henry and Jane (née Morley) Hooper of Stratford-on-Avon in Warwickshire. His parents were married in 1875 in the registration district of Hinckley in Leicester. His father died age 72 on 17 January 1917 in Studley, Warwickshire and his mother died age 91 on 13 November 1942 in Stratford-on-Avon.
At the 1881 Census, Ronald was 3 years old and the family was living at 21 Queen Street, Sterling in Scotland. Also present were an older brother, 4-year-old Henry, 72-year-old Hannah Hooper (assumed to be his grandmother) and 19-year-old Cordela McFarlane.
By the time of the 1891 Census, the family had moved to the Wesleyan Manse in Spotland, near Rochdale in Greater Manchester.  John, a Wesleyan minister, is 46 and Jane 39 years old. They now have three sons; Henry M, Ronald M and John S M, who’s ages are 14, 13 and 8 respectively. Also present is a 19-year-old niece, Emily M Wright, who is employed as a domestic servant. The birthplaces are given as Hinderwell in Yorkshire for John, Sapcote in Leicestershire for Jane, Scotland for the three boys and Egton in Yorkshire for Emily.
Ronald was educated at the Kingswood School in Bath from July 1888 before entering Worcester College in Oxford in 1896 with a mathematics scholarship. He gained a first-class honours in mathematical moderations in 1898 and graduated with a second class degree in mathematics in 1900.
He became a Mathematical Master at Daventry Grammar School, recorded as living there at the 1901 Census. He then joined the Royal Masonic School in Jan 1904 as a teacher of Mathematics, and subsequently as a Housemaster of “Knights” in 1909.  He was still there at the 1911 Census.

Ronald Morley Hooper took up a commission as Second Lieutenant (on probation) with the Royal Garrison Artillery (RGA) on 21 December 1915, and was gazetted on 28 December 1915.  After training at Lydd and elsewhere, he was gazetted as Second Lieutenant in June 1916. He embarked from Southampton on 29 July 1916, disembarking at Le Havre the next day.
Attached to the 11th (Siege) Battery, RGA on 21 November 1916. He was posted with them on 7 December 1916 and later attended the 3rd Army Artillery School between 3 July and 15 July 1917. He was wounded and gassed and hospitalised on 20 July 1917, and sent to England on 29 July 1917 aboard the Hospital Ship St George. He was granted long leave and was in England until Christmas, visiting the School on two occasions.
Ronald re-joined his battery in early 1918 and was killed instantaneously by a shell on 21 March 1918. He was buried at Lebucquiere Communal Cemetery Extension, located to the east of Bapaume. He is also commemorated on the Bushey memorial and on the memorial at Bushey and Oxhey Methodist Church.
Ronald’s medal card gives the address as Mrs. Hooper of 43 West Street, Stratford-on-Avon.
The following tribute was given by his former school;
“As a Housemaster he will be affectionately remembered by several generations of boys, to many of whom he was "closer than a brother." He never had the conventional outlook of the ordinary schoolmaster. He was essentially a man of peace, a lover of books, and a student, with wide interests beyond his subject, especially in the domain of English literature, where his favourites were Ruskin and Blake. At the same time, he was no mean botanist, a musician of parts, and a man whose hobbies were as varied as they were original. All these interests he would share with his House, in whose companionship he delighted.”
There is an entry in the National Probate Calendar for 1918 which states
“Hooper Ronald Morley of The Masonic Schools Bushey Hertfordshire lieutenant R.G.A. died 21 March 1918 in France Administration (with Will limited) London 3 December to Katherine Gladys Morley Hooper spinster attorney of Henry Morley Hooper. Effects £1168 7s 3d.” 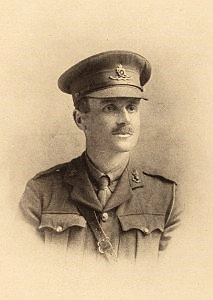