Edward was born in 1891, in St Ippolyts, Herts. The son of Frank Strudwick and Harriet Strudwick (nee Brown). One of seven children. He started school on the 20th March 1896, at the Ippolyts National School. The 1901 Census records Edward aged 9, living with his widowed mother and elder brother Frank 14 in St Ippolyts, Herts. The 1911 Census records Edward aged 19, single and living at The Stables, Guilsboro Lodge, Coton, Northamptonshire. His occupation is given as a Groom Domestic.

Edward lived in Weston, Herts for some time and married Julia Aylott also from Weston, in 1917.

Edward enlisted in Hitchin and was posted to the 1st Battalion, Bedfordshire Regiment, with the service number 12975. He disembarked in France on the 24th March 1915. He was killed on the 1st October 1918, and is buried in Gouzeaucourt New British Cemetery, in France. Extract from the Battalion War Diary for the 1st October 1918 Reads; “1st Oct – Neuville-Bourjonval. Battalion withdraw to huts at NEUVILLE. “A” Line Transport heavily shelled. Casualties 1 O.R. Killed 1 O.R. wounded, 3 horses killed and 3 horses wounded”.

CWGC confirms him as thes son of Frank and Harriet Strudwick, of Herts; Husband of J. Strudwick, of Weston, Stevenage, Herts. The inscription on his headstone reads; “Loyal, Brave and True”. It was requested by his wife.

War gratuity of £19 awarded to widow Julia. Although classified as a Private on most documentation, the Medal Index cards also state he was promoted to Corporal.

Edwards elder brother Frank was also killed in Action on the 7th June 1917, he has no known grave and is Commemorated on the Ypres (Menin Gate) Memorial to the Fallen. 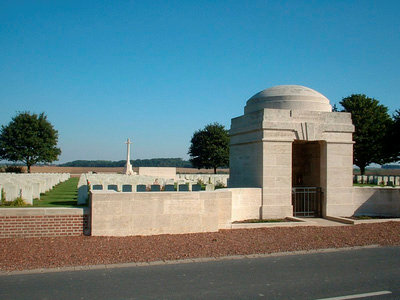