He was his parents' eldest son and they lived at 11, St. Andrew's St. Hitchin. His father had been in the Bedfordshire Regiment during the Boer War. He was married and his home was at 15, Chapman's Yard, Hitchin. Before enlisting he had been a chimney sweep. He was born in Hertford and enlisted in Hitchin in April 1916.

At first he was Regimental Number 34868 in the Royal Fusiliers, but later was posted as number 34043 to the Yorks & Lanes in the 2nd Battalion which was part of the 16th Brigade in the 6th Division of IX Corps in the 4th Army. He went to France in June 1916 and during his service was recommended for a Military Medal although no award was made. He was killed in action in France. His death occurred towards the end of the Battle of Epehy. The Battalion launched an attack at 5.00pm on the 24th September 1918 against the ‘Quadrilateral’, an extremely strong fortification in the Hindenburg Line near Berthaucourt in the northern part of the Somme sector. It had been the scene of numerous disastrous attacks using the same tactics over and over again. Casualties were heavy and the attack, like its predecessors, was unsuccessful. He was buried in Row D, Grave 24 in the Trefcon British Cemetery, Caulaincourt, west of St. Quentin in France. 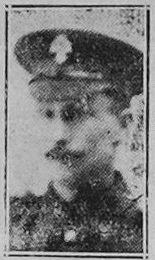