>He has no Headstone. He is commemorated on the Thiepval Memorial to the missing on the Somme, France.

Arthur David Ibbott, the eldest son of Arthur Pearson Ibbott, and his wife Victoria Ibbott (nee Miller), was born in (De Beauvoir Town), Bethnal Green, Middlesex, in 1891, the second in a family of five children.

Arthur’s father was initially a railway clerk and the family lived at a number of addresses in Middlesex before moving to Hertfordshire in about 1900, where their youngest child Claude was born.

Arthur Pearson Ibbott was now a secretary to a public company and by 1911 he had progressed further and was a secretary and accountant to an investment company and the family employed a ‘lady help’. All his sons were educated at Watford Boys’ Grammar School.

The 1911 census records Arthur David Ibbott as employed as a commercial clerk in an investment company, his elder sister was an art student, Harold was an Engineering Apprentice and the two younger brothers were still at school. The family were living at “Osborne Villa”, 57, Chalk Hill, New Bushey, Herts.

When war broke out, he enlisted in Watford as a Private with the Bedfordshire Regiment, transferring later to the Loyal North Lancashire Regiment, 9th Battalion as Private 26046.

He served on the Western Front and was reported missing and presumed dead on 3rd September 1916, aged 25. He is commemorated on the Thiepval Memorial to the Missing of the Somme and on the memorial at St Matthew’s Church, Oxhey. His name is also one of five servicemen on a small stone memorial plaque belonging to Paddock Road Baptist Chapel, Oxhey.

He was entitled to the Victory and British War medals, was reported missing 3 September 1916, and presumed killed in action.

There is an article about and a Death announcement for Arthur in the West Herts and Watford Observer dated 28 July 1917. 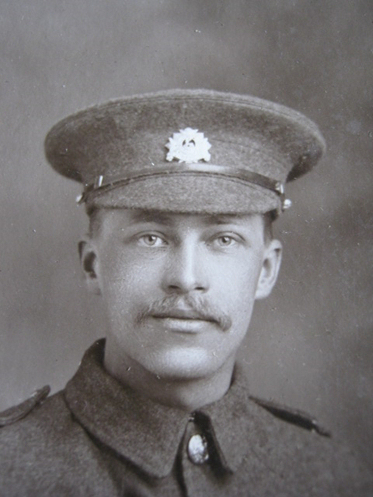