THIEPVAL MEMORIAL
Pier and Face 6 A and 7 C.
France

Son of George, who had been born in Offley in 1849, and Sarah who had been born in Preston in 1856. His parents' home in 1891 was Little Offley Cottage, Offley and at that time he had a sister Emily born in 1880, also a brother Reginald born in 1889 who also went to France. Percy was the husband of Florence Jane Davis, of 5, Chalkdell Terrace, Union Path, Hitchin, Herts. and they had four young children. In 1911 he married Florence Jane TEBBET, with the banns being read in Offley on 20th February. The census of that year records them living at 5 Chalk Dell Terrace, Union Path, Hitchin, Percy age 24 was a domestic gardener with wife Florence Jane (24). Before enlisting he was employed by Hubert Moss at the Croft in Bancroft, Hitchin. He had been born in Offley and was residing in Hitchin when he was called up into the army at Offley on the 14th October 1916.

He was allocated the Regimental Number 178405 and posted to the Royal Field Artillery. Sometime later he was transferred to the 1st Battalion of the Border Regiment and given Regimental Number 33714. The 1st Border Regiment at the time was in the 87th Brigade of the 29th Division. He was sent to France on the 6th January 1917 and was killed in action at Le Transloy having initially been reported as missing. At the time of his death he was in 10 Platoon of ‘C’ Company. From the 16th November 1916 the 1st Battalion had been in the Lesboeufs sector of the front south of the River Ancre and on the 27th January 1917 participated in a raid made on a sunken road near Le Transloy. For weeks a great frost had hardened the ground and constant fog assisted the British attack. The objective was achieved but the ground proved too hard to dig and, with enemy shellfire increasing, the British units retired to their former positions. It is most likely that Percy perished in this attack.

His brother Reginald was also in France. 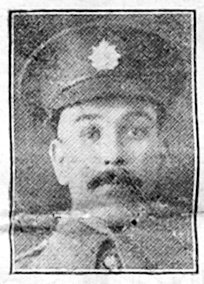