Born in Glamorgan in 1897. 1901 census shows him living with his mother Dorothy in Battersea, by 1911 he was with her and his step-father John Gould Veitch with a baby sister Maud, in Kensington. He attended Westminster school.

He was also the Great Grandson of Sir Robert Harding.

Commissioned 2nd Lieutenant 27th January 1915, Royal Sussex Regiment in 3rd Battalion but attached to the 7th. Arrived in France May 1916.

Took part in Somme offensive, at Pozieres in July-September 1916. The village of Pozieres was one of the objectives of the first day of the battle but was not taken and held fully until September. On 3rd August the 7th Battalion captured enemy positions at 4th Avenue trench and moved on to Ration trench. They were held there for three days and it was while here that Dallas Le Doux Veitch was killed.

His body was not recovered, and he is commemorated on the Thiepval memorial. 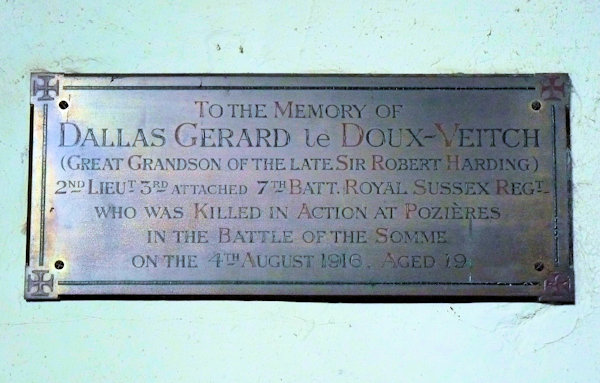