Frederick was the second son of Charles James and Harriett Ann Longman of Upp Hall, Braughing. After his death his next of kin address was recorded as 27, Norfolk Square, London – her father’s address was Norfolk Square. Frederick was educated at Harrow and at Pembroke College, Cambridge. While at Harrow in the School Corps, the football eleven and a dolphin and champion featherweight boxer. At Cambridge he was in the Officer Training Corps. He joined the Herts Territorials in 1910 and recruited some 41 men from around Braughing, where he was also an active member of the rifle club. He joined the Royal Fusiliers as 2nd Lieutenant 13th Feb 1912. In the army, he continued shooting and boxing in competitions.

He went to France 13th Aug 1914 and was promoted to lieutenant 24th Aug 1914. He was wounded in the arm in the Battle of the Marne, but returned after a brief stay in the base hospital and was then killed in action at Herlies. At that time the regiment was holding the village of Le Riez. He was resting at a farm with other officers when a shell burst over the farm. He put on his equipment to join his men, but a second shell exploded and a pellet entered the room through a window and struck him in his temple, killing him instantly. His Colonel wrote: “Please accept my deepest sympathy and be consoled with the thought that his work on active service was as sound and valuable as his conduct has been brace and dutiful. His rapid return to duty after the wound received after crossing the Marne marked specially as a genuine soldier, and his loss will be much felt by all of us professionally and socially.” Another officer wrote: “He was always cheery and it did us good to see the way he did his job, and never grumbled at anything. He was one of the gallantest fellow I ever saw and nothing ever frightened him. We are all proud of him, and his name will always go on in the Regiment’s history as a hero.” And another said “he noticed, on the retreat from Mons how he carried far more than his share of the necessaries, and constantly cheered he men by word and example in their temporary depression.” 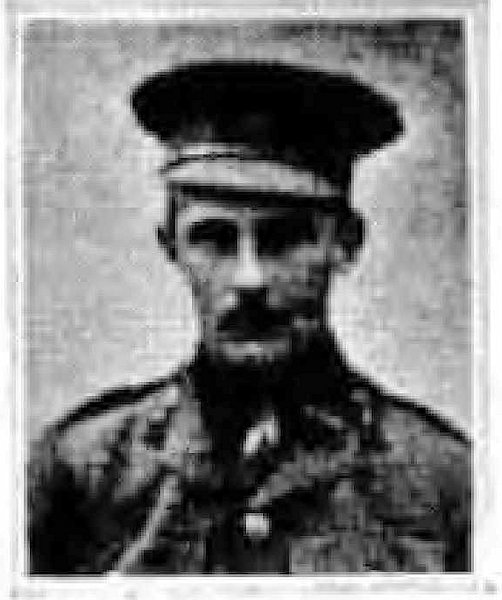