John was the son of George & Julia Marshall of 11 Letchmore Green, Stevenage.

He was initially drafted into the 8th Bedfordshire Regiment and arrived in France on the 27th October 1915. He served for three years on the Western Front and was transferred to the 2nd Battalion at some stage during his service. On the 22nd October 1918 the Battalion were in position at Le Cateau and were ordered to attack an objective known as Richemont Mill. By this stage of the war the Allied offensive had brought the troops out of the trenches and into the open countryside. This particular attack had to be made across high ground and the Battalion found itself facing considerable difficulties. Zero hour was fixed for 1.20am on the 23rd October and at 11 p.m. the Battalion Started to move into position. Tapes had previously been put out by the Battalion Intelligence Officer, for the Southern Attack and by "C" Company’s Officers for the Northern Attack. The work of forming up was carried out successfully in spite of two heavy bursts of hostile Artillery Fire and the Battalion was reported in position by 1245am. The night was moonlight with thick ground mist in the Valleys which made direction difficult to keep. A very heavy barrage opened at 1.20 a.m. and at 1.24 a.m. the Companies commenced to move forward. "C" Company had little difficulty in capturing the first two Gullies, but experienced considerable opposition from M.G. fire in crossing the high ground to attack the third Gully and suffered Casualties. Meanwhile "A" Company had been moving North of the Gullies and after suffering some opposition and Casualties, the Company pushed on to their objectives. A large number of the enemy were encountered in the Sunken Road running from a location known as White Spring and heavy fighting took place here, many of the enemy being killed. The Battalion sustained very heavy casualties during the battle, amongst whom was George Marshall who is buried in the Highland Cemetery, Le Cateau, France 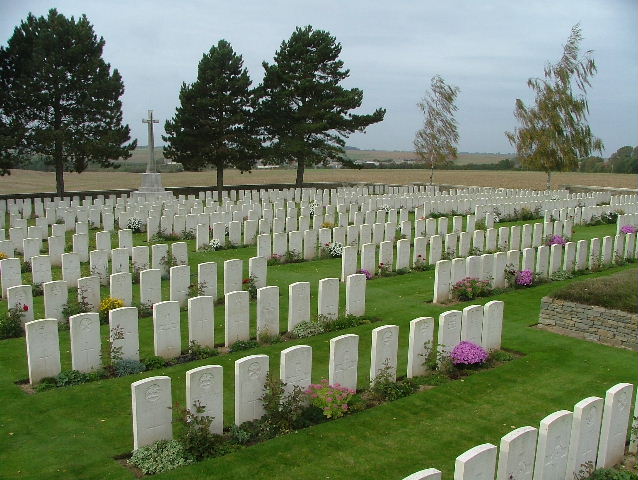