>"UNTIL WE MEET AGAIN"

Harry enlisted at Warley, Surrey, posted to the Royal Sussex Regiment, formerly Private 4042 with the 2nd/5th Battalion and then Private G/18143 with the 7th Battalion.

Harry served on the Western Front and was Killed in Action on 9th April 1918, aged 23. He is buried at the CWGC Senlis Communal Cemetery Extension on the Somme, France. Grave Ref, I. B. 5.

His name is not on the Bushey or Oxhey  War Memorials.

He is recorded as "H. C. OSBORNE" on the Watford Boys Grammar School records.

The value of his effects were £11-15s-5d, Pay Owing and £9, War Gratuity which went to his father Charles. After his death he was recorded as the son of Charles Edward Osborn, of 344, Westborough Rd., Westcliff-on-Sea, Essex, and the late Elizabeth Helen Osborn. Born at Watford. He is recorded as H C Osborne on the Watford Grammar School records. 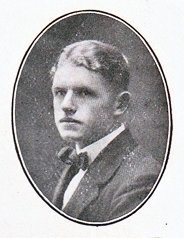