Born in 1892, the son of Edward & Francis Allen of 4, Station Road., Knebworth, Hertfordshire. His father was a Platelayer on the railways and William was one of 12 children. Enlisted at Bedford. Resident in  Harpenden

On the 23rd April 1917 his Battalion were engaged in an attack on the village of La Coulotte during fighting in the Zouave Valley. The Commanding Officer described the attack as “most hazardous” and praised his men for their efforts. As the attack moved forward one company became trapped between two belts of barbed wire, at some places over 15 feet thick, and an enemy communication trench. The Commanding Officer stated that his men were caught like rats and the Germans made good use of this by bringing heavy rifle and machine gun fire to bear on them.

William was killed in this action but his body was never recovered. He has no known grave and his name is recorded on the Arras Memorial, France 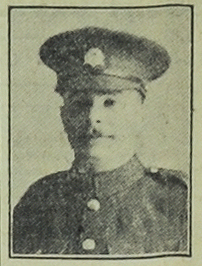