Ernest was the son of John & Martha Phipps of 2 Belmont Cottages, Stevenage.

He arrived in France on the 27th April 1915 and although he was reported as missing just eight days later, during the battle for Hill 60, he was not confirmed as killed until February 1916. The hellish scene that greeted Ernest on his arrival was one of almost total devastation. Shells and mines tore up the ground, dead bodies were laying everywhere and the trenches were described as shapeless cavities. Added to this was the fact that the enemy were only 100 yards away from the British line. At 08.45am on the morning of the 5th May 1915 the Germans released a Gas attack on the British troops. The men were very tired after the preceding days fighting and many were asleep. Fortunately, at least one sentry saw the gas rolling towards the British line and sounded the alarm. The exceptionally thick gas drifted along the length of the trenches and the men’s respirators proved woefully inadequate. In this first attack the 2nd Battalion of the West Yorkshire Regiment lost over 150 men. Then, at 11.00am, a second attack released gas onto the men of the 1st Bedfordshire Regiment resulting in the death of a further 51 men, including Ernest Phipps. In total over 300 men were lost to this devastating attack and, despite several pitiful efforts to attack the hill, it was not captured from the Germans until June 1917 and had cost the lives of over 3000 British servicemen. Ernest has no known grave and his name is recorded on the Menin Gate Memorial, Ypres, Belgium. 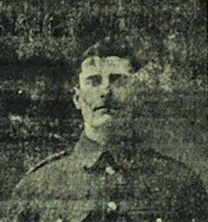