Geoffrey William Barclay was the son of Edward Exton Barclay of Brent Pelham.

His active war service began on 23rd August 1914. He was wounded in July 1915. The parish magazine records that “Captain Geoffrey Barclay arrived safely at the Hall on Saturday August 14th at noon. There is general rejoicing in the village at his gradual recovery from very serious wounds. Captain Barclay brings home with him the ‘Military Cross’ and somehow we all think more of ourselves because he has been so honoured.” He was awarded the Military Cross and Mentioned in Dispatches.

The probate calendar notes that probate was granted on 11th September 1916 to Geoffrey William’s father, and that his death occurred ‘at or near Ypres’. The memorial inside Brent Pelham church reads: - “In proud and loving memory of Major Geoffrey William 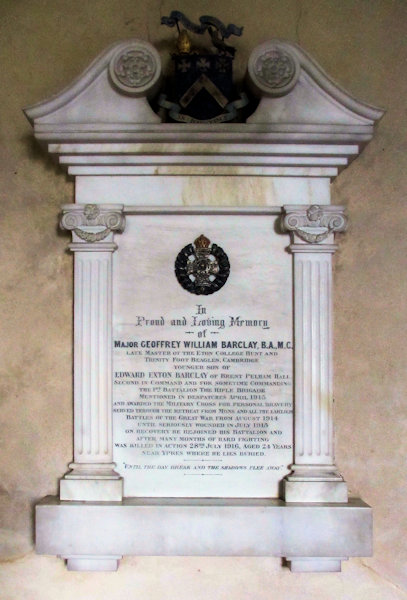