He was married and they lived with his mother at 2, Maxwell Cottages, Bedford Road, Hitchin. Before joining up he was employed by G.W. Russell's Tanyard in Bancroft, Hitchin. He played football in the Union Jack Football Club and was a member of the St. Mary's Bible Class. He had been born in Hertford, but lived in Hitchin. He joined the army in September 1914.

Ernest was allocated the Regimental Number 14429. He went to France in April 1915 serving in the 4th Battalion of the Bedfords. He was wounded during the Battle of the Somme in 1916 and did not return to his unit until January 1917 having had the third finger of his left hand blown off. At the time of his death he was in 16 Platoon of ‘D’ Company and initially he was reported wounded and missing. On the 23rd April 1917 the Battalion attacked and went through Gavrelle in the Arras sector and consolidated the northern outskirts. The Battalion was heavily shelled and counter-attacked but succeeded in driving the enemy off. He has no known grave and is remembered on Bay 5 of the Arras Memorial to the Missing in France.

He had two brothers, both in the army and one of them was also killed in action. 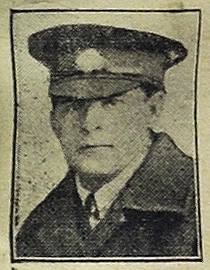