>He has no family inscription on his Headstone

Charles Blackwell was born in Harrow Weald, Middlesex in 1883, the son of Samuel John Blackwell and his wife, Elizabeth Chrisp Blackwell, of the Crosse and Blackwell family.

Baptised on 5th May 1883 in the Parish of Harrow Weald in Middlesex.

Samuel Blackwell and his wife, Elizabeth, of the Crosse and Blackwell family, brought up their 11 children at Brookshill House, Harrow Weald.

1911 Census records Charles as a visitor in Caterham, Surrey and his Occupation is a Solicitor Articled Clerk.

Charles and his younger brother William enlisted together in The Honourable Artillery Company with the Service No. 954 (William 953). He landed in France on 29th December 1914, with the HAC. He was sent for officer training and commissioned Second Lieutenant and posted to the 4th Battalion of the Royal Fusiliers (City of London Regiment) on 11th June 1915. Charles was killed in action the following month, 20 July 1915. He was buried at Ridge Wood Military Cemetery in Belgium. Grave Ref: II. G. 2.

In 1910, at the age of 69, his father Samuel inherited the Manor House at Chipperfield and became a great benefactor to the village. In 1915 Samuel and Elizabeth celebrated their Golden Wedding, but it was not a happy year for them as news came that their son, Charles, serving as Second Lieutenant in the 4th Battalion of the Royal Fusiliers, had been killed in action on 20 July 1915, aged 32.

The following year, a second son, William Gordon, known as ‘Don’, was also killed in Flanders on 5th October 1916.  After the war in 1922, Samuel and Elizabeth had the Chipperfield Social Club built in their memory.  Samuel never got over his loss. His health deteriorated and he died in January 1923. Today ‘Blackwell’s’, which stands next to the Common, is a social club and café.

Charles and his brother, William Gordon Blackwell, are commemorated on the St Matthew’s Church Memorial, Oxhey, near ‘Oxhey Place’, a family home of the Blackwell’s.

After his death he was recorded as the son of Mr. and Mrs. S. J. Blackwell, of the Manor House, Chipperfield, King's Langley, Herts. Information provided with kind permission of Bushey First World War Commemoration Project – Please visit www.busheyworldwarone.org.uk. 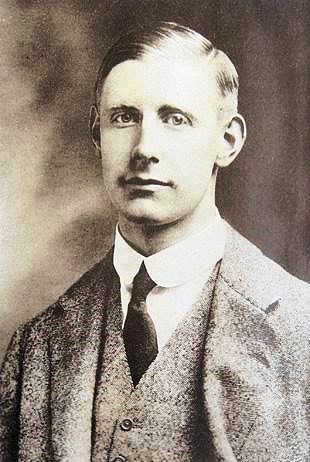