Born on 28 May 1890 in 74 Gower Street, London and baptised on 12 Aug 1890 in St George, Bloomsbury son of Charles Fitzroy Doll, F.R.I.B.A., F.S.I., J.P., (London and Hertford) and Emily Frances Doll (nee Tyler) also of Hadham Towers, Much Hadham, Hertfordshire. Educated at Charterhouse School (1891-1907) and the Royal Military College, Sandhurst. Winner of Lord Roberts' Gold Cup at Aldershot in 1914, with his guns. He was a keen cricketer and is named on the Memorial of Members at Lords cricket ground. He joined the Kings Liverpool Regiment in 1909 and was posted to France on 13th August 1914.

Gazetted 2nd Lieutenant King’s Liverpool Regiment on 6 Nov 1909 and promoted to Lieutenant on 10 Apr 1912. He was killed in action during the first Battle of Ypres. Kings Liverpool War Diary Extract: (The Battle of Gheluvelt) 30th October 1914- Last night at Billets at Nord Westhoek. About 3.30 heard that Germans had broken through the line. 31st October -Received orders to move down to S.W. comer of Polygon Wood. Received orders that we were to counter attack with Worcesters if the 1st Brigade were driven from the Gheluveldt Ridge. Company officers went out to reconnoitre ground over which we had to advance. Lt Doll did not come back. Sent search parties out after him but could find no trace of him. (His body was later found by men of the 54th Battery, R.F.A.)

Malcolm Lennox, “Lest We Forget – Much Hadham 1914-18” by Richard Maddams (Much Hadham Forge Museum) 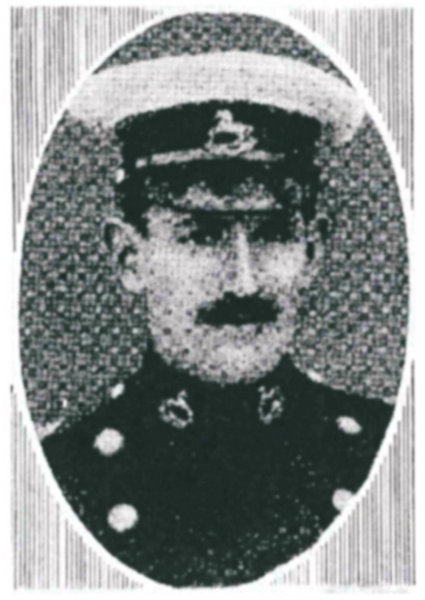