Born 21 August 1891 in Codicote, eldest son of Alfred and Margaret Bradbeer. Baptised at St Giles, Codicote, on 27 September 1891. Educated at Alleynes Grammar School, Stevenage and Pitman's Metropolitan School. Was a Cashier with Messrs Inns & Co, Contractors. 1911 Census: living at home with family at Weston, nr Stevenage and working as a Stockbroker's Clerk.

Joined the 4th Bn., Bedfordshire Regiment, 3 September 1914, then transferred to the 6th Bn.. Went to France August 1915 and promoted to Lance Corporal 4 May 1916. Wounded at Pozieres 15 July 1916 suffering a bullet wound to the shoulder. Sent to Casualty Clearing Station & then by 104 Ambulance to 2nd Western General Hospital, Manchester, where he stayed for 31 days. Returned to England the following February and was accepted for Officer Training on 14 March 1917 at the Cadet School at Pirbright & gazetted 2nd Lieutenant, 11th Bn., Essex Regt. 26 June 1917. Returned to France following August. His last leave to the UK was 17 – 31 Jan. He was killed in action between Morchies and Lagnicourt. An obituary in the North Herts Mail stated that he was hit in the head by a bullet and died within half an hour. It is possible that he was injured but was lost in the ensuing battle and therefore was listed as missing. 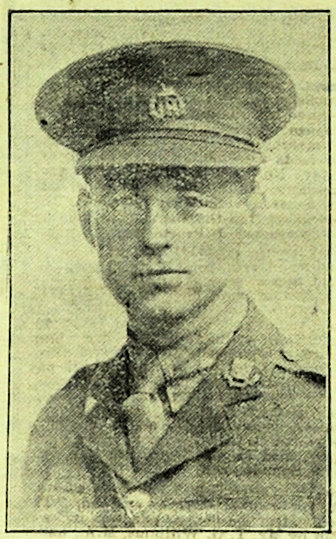