His home was at Well Cottage, Walsworth, and at the time of his death he was engaged to be married. His parents were James and Mary Sapsed of 67, Woolgrove Road, Walsworth, Hitchin. Before joining the army he had worked at the Pioneer Laundry in Letchworth. He had been born in Barkway, resided in Walsworth and enlisted in Hitchin in August 1914.

He was given the Regimental Number 12069 and posted to the 6th (Service) Battalion of the Bedfords which was in the 112th Brigade part of the 37th Division in VI Corps of the 3rd Army. He went to France in July 1915 with Stanley Herbert Leete, from whom he took over distribution of the Hitchin War Comforts Fund. He fought at Loos, on the Somme and at Albert and was killed in fighting at Arras. His Company Officer, Captain Blake, wrote that he was killed instantaneously by a piece of shrapnel when leading his platoon in a successful attack. Captain Blake had known him since the Battalion was formed at Aldershot and wrote that “he was always a cheerful, willing and gallant Serjeant who would be badly missed.” At the time of his death, the Battalion was engaged in the capture of La Bergere east of Arras, but in difficulty with considerable opposition from the Germans and especially from uncut wire. Casualties were heavy. He has no known grave, but is remembered on the Arras Memorial to the Missing in France. 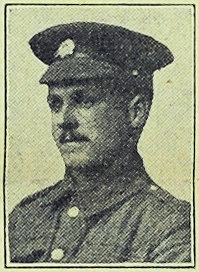