George Barclay Buxton was born in Japan in October 1892, son of the Rev Barclay Fowler Buxton (B 1861 in Leytonstone, Essex) and Margaret M. A. Buxton (nee Railton) (B 1862 in London)  his father was serving as a missionary in Japan at the time. He returned to England via New York on the SS Majestic in August 1898, landing in Liverpool with his parents, brothers Murray and Alfred. He was educated at St Andrews School, Southborough and Repton School, Derbyshire. In 1911 he lived at Widbury House, Ware, Herts, with his parents, brothers Murry, Alfred and sister Rachel. George was working as a bank clerk. In 1912 he left England and went to Kenya where he worked as Assistant Manager at the East Africa Industries estate in Maseno, British East Africa.

In 1914 he decided to become a missionary and join his brother Alfred in the Belgian Congo but the war began before he could leave.

As he was in Africa when war broke out he volunteered joining the Kings African Rifles as a Scout. Took part in a number of missions between August and November 1914, when regular troops arrived and took over from the volunteers.

Posted to flying school in Abbassia, Egypt in March 1917, where he completed a course in flying theory. Then posted to Ismalia for flying training, returned to England in May 1917, after training in Lincolnshire and at the aerial gunnery school in Turnberry, he qualified as a pilot. Posted to No. 1 Squadron at Bailleul in France. On one of his early patrols his aircraft was full of bullet holes when he returned to base but George was not wounded. Reported missing on July 28th 1917, after he was last seen chasing 4 German aircraft, having already shot down another. His body was never recovered; he is commemorated on the Arras Flying Services Memorial, Arras France.

There are two entries in the soldiers effects register one for £108-7s-0d, and the other for £33-16s-0d, the recipient is not given. His two elder brothers also served and both were awarded the Military Cross. Both brothers were killed in WW2 in an air raid in London. 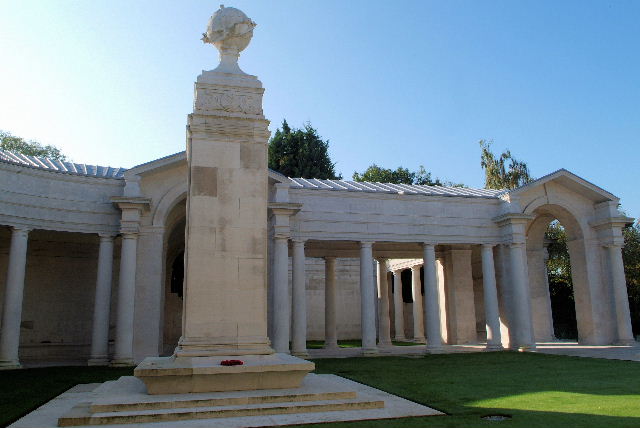