>BLESSED ARE THE DEAD WHICH DIE IN THE LORD

Samuel Draper was born in 1891 in Ayot St Peter, Herts, He was one of the sons of George Draper and his wife Sarah who kept a shop in Ayot Green from 1886 and also ran the smithy next door.

On the 1901 Census the family were living at Ayot Green where his father was a blacksmith but by 1911 he was living at 96 Adelaide Road, West Ealing, London as a boarder and working as an 'Engineers' Learner' in Motor & General Engineering.

He enlisted in London and served in France with the Army Service Corps from 23 December 1914.

He died of wounds at the 5th Casualty Clearing Station which was stationed near Picquigny  to deal with casualties incurred from the German advance on Amiens.

His father, George Draper Esq of Ayot St Peter, Welwyn, Herts, ordered his headstone inscription: "BLESSED ARE THE DEAD WHICH DIE IN THE LORD" Probate was granted on 9 May 1918 to Sarah Elizabeth Draper with effects of £264 15s. His mother received a war gratuity of £16. Brother to George Draper, also named on the Ayot St Peter memorial. 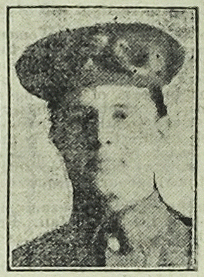