He took part in the very first Tank battle, at Flers on the 15th September 1916, during which he was wounded in the face. He was awarded the Military Medal, which was confirmed in the London Gazette on the 8th December 1916. George was in crew D5, a tank called “Dolphin” (No 540 – Female). His tank was supporting the preliminary attack by 14th Division to the East of Delville Wood, with D1 attacking from the South, then tasked to move north east of Flers. D5 ditched on route through Delville Wood and was not on time to support D1’s initial attack. Recovered by D3 (Head), it followed up the infantry, parties clearing bodies in order that the tank did not run over them. It was well behind the first waves as it crossed its first objective (the German front line). Slowed by the badly damaged ground, and its steering wheels which were being dragged uselessly behind, it reached the second objective at Gap Trench. "Dolphin" then crossed diagonally from the west to east side of Watling St. Although tasked to advance 400 yards North-East along Gas Alley, Blowers followed Watling St. In a sunken portion, he found abandoned two Germans guns and destroyed them before moving north. At this point, the tank started to move ahead of the infantry, who had come under highly effective fire from machine guns, and reached the third objective (Bulls Rd), where it crossed Watling St. Dolphin pushed on and reached the next German trench line (Gird trench). D5 was now well ahead of infantry; as the commander had been ordered not to let his tank fall into enemy hands, Lt Blowers turned his vehicle south. Following Sunken Lane, he was met by an infantry runner (possibly 5 KSLI) somewhere south of Bulls Rd, who asked him to destroy a German strong point to the east of Flers. Lt Blowers turned “Dolphin” west and crossed the sights of German artillery located in Gird Trench. A shell exploded inside the tank and it caught fire. This was no later than 1000 hrs; the tank being located at T1B78.78. Other shells hit the tank and the two of the crew were killed or died of wounds. Lt Blowers and two other crewmen were injured but made their way back to their own lines. Dolphin travelled the furthest distance of all the tanks deployed on 15th Sept, more than 4,800 yards at an average speed of 24 yards a minute. The crew on the 15th September 1916 were: Lieutenant Arthur BLOWERS MC – Wounded Arthur Blowers survived the war and led a somewhat traumatic life. He died on the 10th January 1980 aged 89. Corporal Edward (Ted) FODEN MM - Wounded Wounded in the ankle and hand by the shell explosion he suffered a permanent limp for the rest of his life. He died in 1978 aged 81. Gunner Edgar Robert BARNSBY - Killed His legs were shattered during artillery fire within the tank. On 30th September 1916, a party returned to the scene of the action and buried his body next to Gutsell – the grave has since been lost. Gunner Leslie Robert GUTSELL - Killed His body was recovered and buried on 30th September next to Barnsby. His grave was subsequently lost. Gunner HODGSON He helped Blowers get Barnsby out of the tank and put him in a shell hole, then returned to own lines. Gunner PLANT Gunner Faraday SLADDIN He served with “D” Company, then “D” Battalion and then 4th Battalion until February 1919. Never promoted, he returned to Yorkshire and married a local girl Edith Gaudin in 1922. They settled in Cornwall but sadly Edith died in 1946. Faraday remarried in 1948, to Eleanor Denham, but he died on 16 September 1953. Private George Henry THOMAS MM – Wounded As outlined above 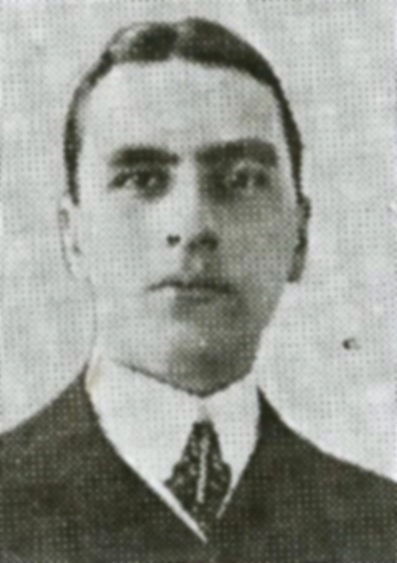