Walter Shadbolt was born 1886 in Tewin, Nr Welwyn, Herts, the son of Arthur and Elizabeth Shadbolt. In 1891 the family were living in Tewin and his father was working as a gardener and domestic servant. By 1901 the family were living at Lower Green, Tewin and Walter was working as a gardener. In 1911 they were living at Haines Cottages, Tewin and Walter was a watercress worker. He married Rosetta Wilsher (formerly Croft), of Bridgefoot Villa, Datchworth, Nr Stevenage, Herts  in 1912 and they had two sons, James Walter (1914) and Leslie Herbert (1916).

He enlisted at Hitchin, and served initially in the Northamptonshire Regiment, later transferring to the Machine Gun Corps. Walter died at the beginning of the Third Battle of Ypres, better known as Passchendaele, when there were heavy casualties in the first two days.

He is also remembered on his brother's gravestone (Bertie) in St Peter's Churchyard, Tewin. A war gratuity of £3 was granted to his wife Rosetta as well as a pension of £1 2s 11d a week from 4 March 1918. Brother to Bertie Shadbolt who died on 15 July 1916 and who is also named on the Tewin memorial. Rosetta later married Frank Croft in 1919 and lived at Bridgefoot Villa, Datchworth, which. presumably, is why Walter also appears on the Datchworth Memorial. 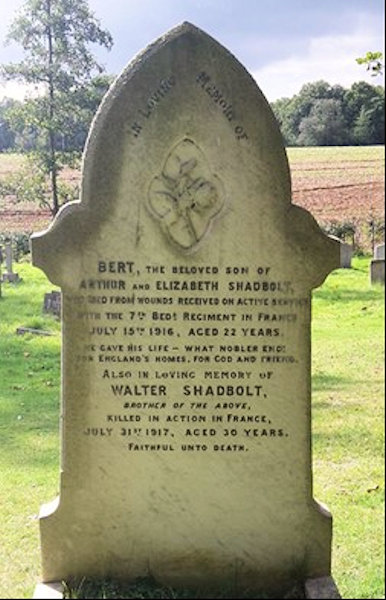