Born in 1885 in Breachwood Green, Kings Walden. Son of Herbert Sharp (a forester for the Stagenhoe estate) and Emily (nee Peacock) 9, Council Cottages, Preston near Hitchin. He married Annie Moules in late summer 1910, but she died early in 1911 before the Census, when Sidney is described as a widower and is living at Chequers Lane, Preston with his family and working as a farm labourer. Parents later lived at 9 Council Cottages, Chequers Lane. He was a widower with no children, his wife having died after only eighteen weeks of marriage.

He enlisted in Hitchin and was allocated the Regimental Number 20818 and posted to the 2nd Battalion of the Bedfords. He went to France on the 20th February 1916 and was killed in action in France. At the time of his death the 2nd Battalion of the Bedfords was part of 89 Brigade, 30th Division of XIII Corps. This was on the day of the attack on Maltz Horn Farm Ridge near Trones Wood. The 89th Brigade was on the right and attacked at 4.45am from trenches south of Trones Wood. It was a foggy day and the fighting was confused, but the Bedfords killed 70 to 80 Germans in one trench alone. The 2nd Bedfords casualties for the day were 186 other ranks killed, injured or missing. He has no known grave, but is remembered on Pier and Face 2C of the Thiepval Memorial to the Missing in France. See additional information sheet. 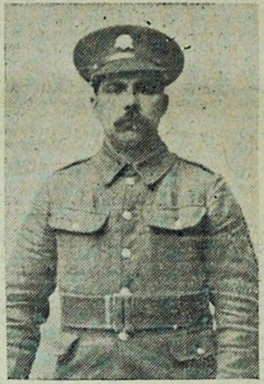