Born in 1900 and in 1911 was living in Roydon Road, Stanstead Abbotts with his parents William, a malt master, and Lizzie together with 3 sisters and 2 brothers.

Enlisted in Bedfordshire Regiment, possibly in 1918, and then transferred to D Supply Company, Army Service Corps. They would have been in working until the armistice, but Albert appears to have stayed on in the Army as he reappears in 1921 in Ireland, still in D Supply Company. At about 0900 on May 14th 1921 in Dublin, a party of soldiers arrived at an abattoir to collect meat for their barracks; they went inside and left their armoured car escort under guard outside. A group of armed men approached the guard and told him to surrender, he refused and was shot. Inside the other soldiers in the party had also been surprised by another armed group and told to surrender weapons; one man refused and was shot. Their weapons and the armoured car were stolen. One of the two soldiers killed was Albert Saggers. It is believed that that the attack was carried out by 3rd Battalion Dublin Brigade of the IRA led by Vinnie Byrne, one of Michael Collins’ squad known as the 12 Apostles. 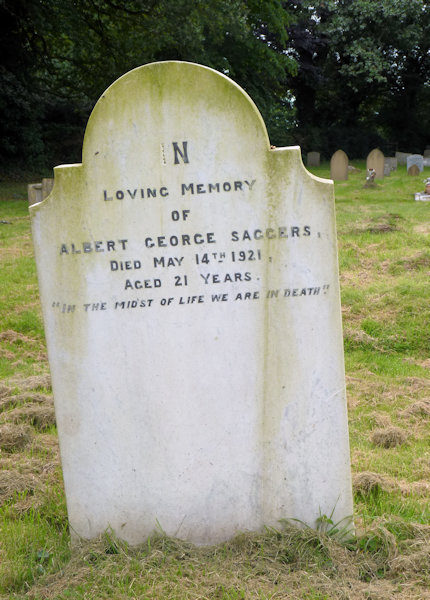