Alfred was born on the 2nd March 1881, the son of William & Rebecca Draper of Primrose Hill, Stevenage. After leaving school he worked as a Groom and a Domestic Gardner but by 1911 was employed as a Roadman for the Hertfordshire County Council. He married Annie Briars in 1908 and the couple lived at 9 Church Path, Stevenage.

Alfred arrived in France on the 30th August 1915 and served with the Battalion in many actions on the Western Front. The German offensive in March 1918 sent the British Army in the Somme region into complete disarray. The speed of the enemy advance often left units cut-off and the fighting was both confused and bitter. During the period 22nd - 27th March the Battalion had been in continuous action and it was during this time that that their commander, Lieutenant Colonel Collings-Wells received the Victoria Cross. Alfred had been in the thick of the fighting throughout the entire time with only a short period of rest. On the 3rd April 1918, after some re-organisation, the Battalion took over the sector on the Mesnil Ridge. Here, over the next few days, they were again involved in heavy fighting with German troops who were still attempting to break through the British lines. Alfred was killed, probably as a result of shellfire, when the battalion were in the line at Forceville, South of Mesnil. His younger brother, George, had been killed in the same sector of the Somme two years earlier. 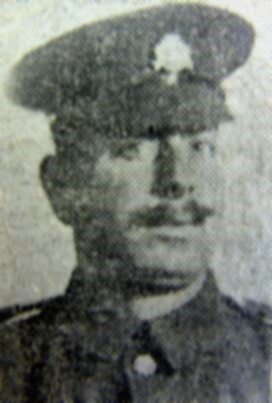