Not Yet Researched
Chevalier of the Legion of Honour

Donald was the son of James Strachan Oswald and Alice Louise Oswald. After the death of his mother in 1904, when he was aged 14, he and his sister made their home with their Aunt and Uncle who were Mr & Mrs Charles Poston of Highfield, Stevenage. He was greatly attached to the area and when on leave hunted with the Hertfordshire & Puckeridge fox hounds and took a keen interest in local sports particularly the cricket club.

Donald spent his time as a Midshipman serving in the Mediterranean and in January 1909 he commenced his qualifying course for Lieutenant. Later he qualified as a French interpreter and won the Ryder prize given for the best paper of the year and a valuable prize for German. When war broke out he was in Germany qualifying for an interpreter’s course, which he was never able to complete. His first appointment during the war was to the French destroyer Escopette as a liaison officer on the staff of the French Commander in Chief, for which he was awarded the Legion of Honour in recognition of his services. He then spent nine months at Scapa Flow serving in HMS Crescent and HMS Swift and it was in this ship that he later joined the Dover patrol. In October 1915 he married Margaret Don, a Scottish girl, and in July 1917 the couple had a daughter, Margaret. Donald was unable to see his wife and child until he obtained a fortnights leave in August 1918 after completing a stint of overseas service. He was then appointed to HMS Gloucester and in her he took part in the Battle of Jutland. In August 1916 the ship was sent to the Mediterranean and he was still serving in her at the time of his death. After contacting Flu he was removed from his ship and taken to the Brindisi Naval Hospital in Bari, Italy. His wife was taken to him at his bedside and sent home several reassuring telegrams stating that he appeared to be improving. He died on the 6th January 1919 as a result of Pneumonia following his infection and is buried in the Bari War Cemetery, Italy. 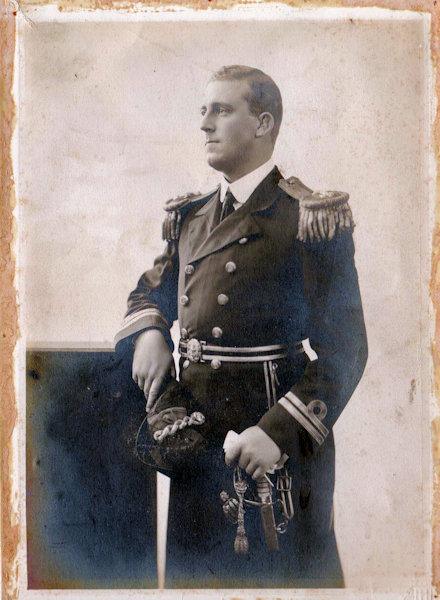