Ernest was born on the 25th February 1886, the son of John & Elizabeth Chambers of Symonds Green, Stevenage. Before joining the Army he had been employed by T.G & H.E.Worboys, Timber Merchants in Stevenage.

He served as a Blacksmith with the Royal Artillery and was posted to France on the 13th December 1915. Whilst on leave in September 1918 he married Kathleen Stutley. Two months later he died in hospital of bronchial Pneumonia, probably as a result of contracting influenza. His brother, Seymour, was killed in action on the 24th June 1917. Ernest is buried in the Le Quesnoy Communal Cemetery Extension, France. 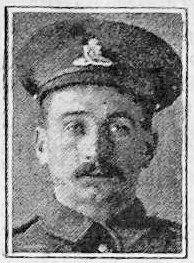