Henry Aldridge was born 23rd February 1883 (not 1886 as stated in the information from De Ruvigny’s Roll of Honour below). One of ten children born to William & Jemima Lydia Aldridge (nee Strange). Henry’s father William was originally from the Hay Street/Gt Hormead area, his mother from the Nuthampstead/Anstey area. They married in 1877, and are found living in Standon High Street, probably not far from the Bell Inn, from the 1881 census on. Henry was born in Albury and was baptised there in April 1883 (not Standon as mentioned in the Roll of Honour below) but most of his siblings were born in Standon.

In 1891 he was living in Standon with his parents; his father described as a general labourer and in 1901 he was still living with parents in Standon and recorded as a grocer's assistant.

The 1901 census shows Henry working as a Grocer’s assistant, quite possibly in Standon High Street.

The 1911 census shows four younger siblings still at home with their parents in Standon, three brothers and one sister, with Henry’s brother William, then 17, shown as a Station Porter, presumably at Standon Station. Young William later joined the army himself and served in France, surviving the war.

Henry is found on the 1911 census as a boarder in Tottenham. His occupation is shown as a chaff cutter. Four months later, on 19th August 1911 he married Phoebe Freeman in Tottenham and as so many people with humble occupations did, he promoted himself to a Corn Chandler on the marriage certificate. Henry married Phoebe Mary Ann Freeman, daughter of Edward Freeman, in Christ Church, Tottenham N., Edmonton district and was then recorded as a chaff cutter. A daughter, Phoebe Marjorie, was born 1916.

He enlisted Tottenham in 1916. He was in 11th Bn. Suffolk Regt, mainly recruited in Cambridge.

The website www.1914-1918.net helps inform us of the Suffolk Regiment’s war service and Henry would have shared some or all of that:

Towards the end of May 1918 the Suffolk Regiment were transferred to 61st Division, which took part in the Battle of Selle and the Battle of Valenciennes (both phases of the final advance in Picardy). “It took quite some months for the Division to be rebuilt, but once ready it played an important part in the final defeat of the enemy. It joined XVll Corps and took part in actions in October 1918 at Bois L’Eveque, Pommereuil, Bousies Forest and Vendegies - sur-Ecaillon. It pushed on, across the rivers Rhonelle and Selle and into the industrial area of Valenciennes. In the first week of November, the Division crossed the Sambre, the last prepared defensive position the enemy had.”

He is listed with photograph in De Ruvigny’s Roll of Honour 1914-1919, albeit incorrectly stated as born Standon.

His name and picture appear in De Ruvigny’s Roll of Honour, the entry reads:

“Aldridge, Henry, Sergt., No. 201641, 11th (Service) Battn. The Suffolk Regt. son of William Aldridge of Standon; b. Standon co. Herts, 23 Feb 1886; educated there; enlisted in the Suffolk Regt. 19th June 1916; served with the Expeditionary Force in France and Flanders from 5 Nov. following, and was killed in action there 24 Oct. 1918. Buried at Vendegies, north east of Cambrai. A letter written stated: “I can only say that of all the six who were killed in the recent action, there is no one about whom I am more grieved than your husband. Whenever we were under heavy shelling, his coolness helped us all. I know that once he saved several who were buried alive during a German barrage in Aug. In every way he was a right hand to me.” He married at Christ Church, Tottenham N. in 1911, Phoebe Mary Ann (23 Culrose Road, Lower Tottenham, N.), daughter of Edward Freeman, and had a daughter, Phoebe Marjorie.”

After his death he was recorded as the son of William and Jemima Aldridge; husband of Phoebe Mary Ann Aldridge, of 23, Culross Rd., West Green, South Tottenham, London. 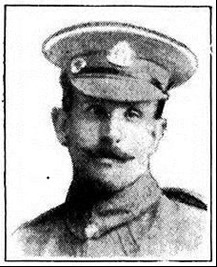