After joining the Army, the young Farm Labourer was posted to the Western Front, arriving there on the 30th September 1915. He took part in some of the most intense fighting of the Great War and was to eventually lose his life during the closing stages of one of the major British offensives, The Battle of Passchendaele. The offensive had been launched on 31st July 1917 and continued until the fall of Passchendaele village on 6th November. Although it resulted in gains for the Allies it was by no means the breakthrough General Haig intended, and such gains as were made came at great cost in human terms. The area had suffered some of the heaviest rains it had seen for 30 years and this, combined with intensive shelling from both sides, had turned the ground into a hellish morass. The Battalion arrived at Sanctuary Wood in the Ypres sector on the 3rd October 1917. Over the next few days they would be involved in an attempt to capture Polderhoek Chateau. However, these attacks proved to be unsuccessful due to both very heavy German machine gun and artillery fire plus the almost impenetrable mud which reduced any attack to a crawl. Herbert is buried in the Zantvoorde British Cemetery, Zonnebeke, Belgium. 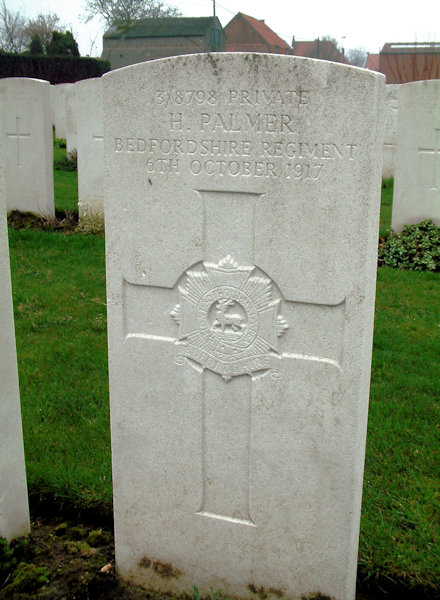