Sidney Lowry was born in Stevenage on the 8th June 1888, the son of Henry Lowry. He was educated at Cambridge University and served in the Charterhouse Officer Training Corps as Private 946. On leaving university he commenced a career on the London Stock Exchange until the 5th August 1914 when Sidney joined the Territorial Army and prepared to do his duty as an officer and a gentleman, being commissioned on the 1st October 1914. He was posted to France on the 30th January 1915.

On the 4th June 1917, just four days before his 29th birthday Sidney was awarded the Military Cross. On the 31st July 1917 the Battalion were in support of an attack on the Langemarck Line and at 03.45am the planned assault began, with Sidney in command of No.2 Company. It had three objectives to achieve known as Blue, Black & Green and units of the 116th Brigade easily captured the first two objectives, preparing the way for the forward companies of the Hertfordshire battalion, to take the third objective. At 05.00am they left their assembly positions to attack their objective, which lay over the crest of a ridge. As they made their way forward they came under heavy fire from both German machine guns and snipers but after eliminating a German strongpoint moved up towards St.Julian, which was only lightly held. The battalion crossed the Steenbeek with some difficulty and two of its supporting Tanks became bogged down in the mud. Things then went from bad to worse. A pre-arranged artillery barrage never materialised due to the guns being unable to move forward over the muddy terrain and the German barbed wire defences, which were fifteen feet deep in some places, were found to still be intact. It was soon realised that ground could only be won by section " rushes" supported by the unit’s own fire. The Cheshire Regiment were on the right of the battalion but the Black Watch, who were due to cover the left flank, had been seriously delayed. This left the Hertfordshire’s seriously exposed and the Germans exploited this by bringing a hurricane of fire down upon the stricken troops. This was followed by a German counter-attack and by 10.30 am it was clear that the objective could not be achieved. Casualties were very heavy with 459 men being killed, missing or wounded. Sidney’s body was never recovered and, as he has no known grave, his name is recorded on the Menin Gate Memorial, Ypres, Belgium. 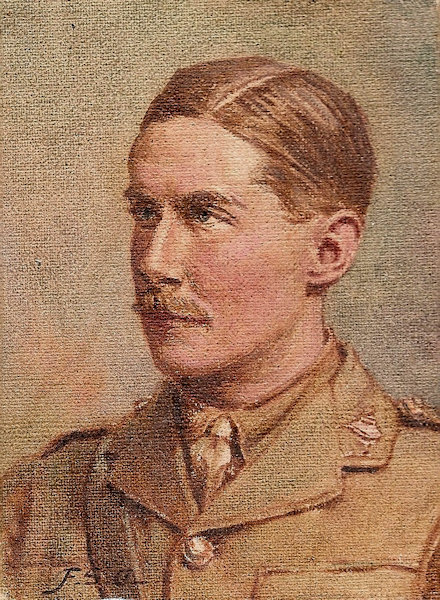