Born in about 1881, William Thomas Allen was the eldest son of Joseph and Emma Allen. His father was a railway labourer. When he was about eight years old, his father died and his mother moved from Watford Fields to 6 Crook Log, one in a row of small cottages on the London Road in Bushey. She worked as a laundress and William was later employed as a bricklayer’s labourer and lived at home. By 1901, when other members of the family had left home, William, who was 20, and James, who was 12, remained with their mother.

In 1905 William married Harriet Whitfield and in 1911 they were living at 144 Bushey High Street with 2 children, James (aged 4) and Helen (aged 2). William and Harriet subsequently had three more children, Anne, Emma and Albert.

William enlisted at Watford as Private 10881 with the 2nd battalion of the Royal Fusiliers and was killed in action on 13 April 1918, aged 37.  After his death his wife moved to 33 Clay Hill, Bushey.

He is remembered with honour at Merville Communal Cemetery Extension in France and also commemorated on the Bushey Memorial and at St James’ Church.

His younger brother, James Berry Allen, was also killed in action on 3 September 1916. 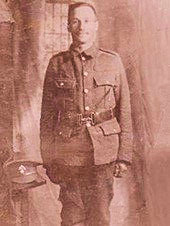